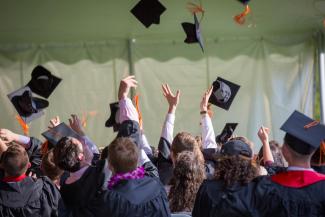 What To Expect In The Coming Decade -  Part III - Higher Education

As we transition from one decade to the next, we often focus on what has transpired in the previous ten years.  The last few blogs have focused on the future – and what changes might be in store for us financially.

As I briefly mentioned in our last blog, life was very different for a graduating college student thirty years ago.  Even though I personally graduated during a recession, I’d rather be a graduate then than now.  It seemed like there were more opportunities back then for success.

Back before the last recession, there was a term that was thrown around considerably for many years:  Peak Oil.  (What does oil have to do with college?  Bear with me a moment.)  Peak oil was that moment when we were using more oil than we could pump out of the ground.  It was a major turning point and a source of worry for many economists.

Peak Oil was caused by two factors:  There was less oil to be found and we had ever more people and industries using fossil fuels.  The result was an expected shortage similar to what we witnessed in the 1970’s along with the massive increases in prices.

Peak Oil was a huge concern prior to the economic downturn of 2008.  But the recession, the increase in alternative energy and the discovery of massive oil deposits in the US and Canada put an end to any Peak Oil concerns for many many years.

So, again, what does Peak Oil have to do with college and higher education in America?

For the whole of the 20th century, and much of the last 20 years, we’ve seen college admissions increase annually.  Institutes of higher learning can count on a robust group of prospective freshmen every year.  But when there are less people attending college, what happens to the entire higher-education industry?

This trend is significant.  And relates to how we perceive children.  150 years ago, before the Industrial Revolution really took hold, children weren’t considered a burden but a profit-center.  If you were a tailor and had 8 children, that was 8 free workers so that you could make more money.  In 2020, having 8 children is 8 extra mouths to feed, eight extra soccer practices, eight sets of new school clothes, etc.,

Work and careers changed as the Industrial Revolution advanced.  In addition, labor laws reduced the ability of your average 11-year-old to work full-time.  Children went from being an economic benefit to becoming an expense.  And as parents understood this, they had less children.  Today, many families are going childless or having only one child in because of the constraints of an otherwise busy world.

US population growth from births is dropping precipitously – as is the rate in much of the developed world.  Assuming this trend continues, and there is no reason to feel it isn’t, the US population will be lower in 2100 than it is today.

The Government Makes a Fatal Mistake!
Back in the early 1980’s, observing a continued trend of more students wanting to go to college, the federal government decided to see how it could maximize its help.  The federal government only has so many dollars to spend on education per year.  Prior to 1985, most of that money was spent on grants.  Students would apply and the government would hand cash-money directly to the university to reduce tuition for a select few students.

But this method meant that only a fraction of students who could use aid received it.  A decision was made to reduce the amount of grants and expand a program to subsidize the interest payments of student loans.

On the surface, that seems like a good idea, right?  Let’s help more students by giving them an interest-subsidized loan.  After they graduate, they’ll be making more money and can easily pay the loan back.

Over time, more and more families felt comfortable with this new debt.  The natural progression was to offer them unsubsidized loans.  To take up the rest of the slack.  Well, if one loan was OK, two can’t be that much worse, can it?

Today, it is all but assumed that you will borrow money to attend college and anyone who pays their own way is considered an oddball.  In less than 2 generations of college students, we’ve gone from the borrower being a rarity to the full-payer being a rarity.

The Unintended Consequence
What even fewer could have predicted in the 1980’s was the unintended beneficiary of all of these new loan programs.  One would have thought it would make college more affordable.  But the reality is that in 1980, families that wanted their student to attend college figured out a way to get that student to college.  There weren’t millions going un-educated because of cost.

As loan money increased, colleges increased their prices.  Despite a never-ending sea of new candidates, they felt they should invest into their campus.  Building campaigns exploded.  Services for students increased.  Cafeteria options expanded.

Again, what seemed like an innocuous improvement in the average university really meant that for decades, the cost of college rose twice as fast as inflation.

To add insult to injury, it has reached a point where a student’s choice of college is based on how published their professors are and the food and activity options in the Student Center instead of the employment opportunities available from attending College A versus University B.

Today, students are graduating mired in debt.  Debt they can’t pay off quickly.  Debt that is causing them to delay getting married, starting a family, buying a house.  What is worse is that for the huge sums paid for an education, today’s student isn’t any smarter than one thirty years ago.  In fact, there are indications that they are less prepared to transition into the “real world.”

Where does that leave us in the future?  I’m not sure about the recent graduates – they are going to be saddled with debt for a while.  But just through demographics alone, I know that the trends that have dominated the higher educational scene for the last 30-35 years are going to change drastically in the next ten years.

What Changes Can We Expect?
There are many changes likely to occur in higher education.  Not all of them will be bad.

Parents who have young children now have experienced the serious problems of excessive student debt firsthand.  They didn’t like it and they’ll do anything they can to mitigate the problem for their children.  So future parents are going to be very price and value conscious.  I can’t imagine a worse business to be in:  One where you have fewer and fewer customers and those customers are stressing price and value more and more.

Colleges and universities spent the last few decades expanding.  I know my alma mater doubled its campus in the last 30 years.  What will they do when their enrollment is cut by 10%?  Or half?

I predict that we will see colleges merging and closing.  Just last year Mount Ida College in Newton closed its doors after over 100 years.  And Mount Ida was one of over 20 that closed in the last four years!  More than 30 more state-sponsored schools experienced some sort of consolidation in the same time.  (EducationDive.com 11/1/19)

Those schools that do survive will have more campus than they need.  That could mean more integration within the local community with the town or city utilizing some of that building space for its own needs.

Ultimately, not only will tuition costs stop rising faster than inflation, we may see them stabilize or even drop.  I’m sure most institutions will do this quietly – effectively offering tuition discounts as part of their aid programs in order to attract enough educationally-qualified students.

There is one bright silver lining to the cloud hanging over the heads of college deans nation-wide:  We are seeing a resurgence of focus on the trades.  Television personality Mike Rowe has a foundation dedicated to helping young people get involved in electrical, plumbing, welding, HVAC and other hands-on careers.

With 40+ years of focus on college, there is a shortage of experienced younger workers in many of these fields.  That means more opportunities for young people if they are willing to take a job that will get their hands dirty.

Education will continue.  It always does.  In fact, online learning, YouTube and other avenues are exploding as people continue to seek to know more.

It will be fascinating to see what will become of our economy when less education is centered around ivy-covered buildings filled with tweed-ensconced professors and more is pushed out into the world.