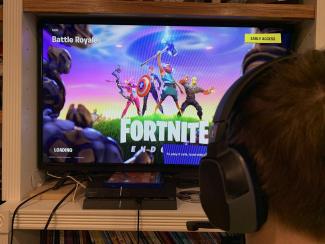 Technology Advancing in a Fortnight

Financial success is more than finding the best investments and monitoring our cash flow. It’s understanding the world around us and using it to our advantage.   This starts first with understanding our world and how it is changing.

Over the next several issues, we will analyze our world a bit to help us get the building blocks for good financial decisions in the future.  They may not be 100% relatable to typical “financial” articles we may publish, but I hope you enjoy them just the same.

We’ve spent the better part of two months now discussing how technology is disrupting our economy.  Sometimes, this disruption is happening in sectors of the economy we aren’t even aware of.

For example, my 11-year-old son plays a video game called Fortnite.  If you’re like me, you’ve probably never heard of it.  Yet it is one of the most popular games being played by people of all ages, all across the globe today.

Fortnite is basically a “shoot everyone you see” sort of video game.  Officially, it’s a first-person elimination match.  This means you control a single character, seeing the world through their eyes, and try to eliminate other characters in the game.  What 11-year-old boy wouldn’t like this?

Up to 100 players run around a comic-book-esque world trying to eliminate players with various weapons they obtain while wandering around the game.  Gameplay takes place on a huge map that randomly shrinks as the game progresses.  The goal is to be the last man (or woman) standing.

It is so popular, there’s always a new game of 100 players starting.  Always.  24 hours a day.  I’ve never seen my son wait for longer than five seconds to start a new game.

Part of the allure of Fortnite is that it is a cross-platform game.  This technology is pretty amazing.  But let me slow down a bit and explain cross-platform gaming and how it is changing the face of video games.

My first video game was Pong, purchased at Radio Shack and connected to the VHF antenna input with an adapter.   My brother and I hooked it up to an old Zenith black and white TV in my parent’s bedroom and played for hours.  (Thankfully, Pong was black-and-white so playing on a 20-year-old black and white TV wasn’t a big deal.)

After Pong came Atari.  This was the late 1970’s and I had one of those as well.  Again, hours were spent playing.  The games were in color and had significantly better graphics and game-play.  But still, it was me and my brother playing together on the same computer system.

After Atari, I lost interest in gaming.  But gaming systems never went away.  They kept adapting and improving.  Graphics got better.  Stories became more detailed.  Today video games are dominated by PlayStation and Xbox.  Plus you can play games on your PC or your smartphone.

About 20 years ago, a new trend began.  Gaming companies started using the internet to allow people to connect and play with each other world-wide.  Instead of playing a game against your computer, you could connect to an online server and play against friends or just random folks via the internet.

This was revolutionary.  Players played longer.  By selling additional in-game items, video game companies were able to monetize this increased play.  In the last decade, it’s been rare to find a game that doesn’t allow you to play online with your friends.  It is that popular!

Virtually all video games, since the dawn of online gaming, are what is called a single platform.  If I’m playing on a PC and you are on an Xbox or your iPad, we can’t play together online.  I can only play with folks on a similar “platform.”  Xbox to Xbox, PlayStation to PlayStation, PC to PC.

Fortnite is different.  It doesn’t matter the platform.  So everyone is playing one big free-for-all.  Across all devices.  Across the entire world.

So far since inception less than 2 years ago, Fortnite has a total revenue of over $2.4 billion. (Source:  WSJ) Just for scale, the NFL earns approximately $8 billion per year.  Just one game earned a third of what the NFL generates. Online gaming is huge and Fortnite is at the fore-front of it.  Within a few years, the entire industry could be larger than the NFL or even all major league sports combined!

Nope.  The game is completely free to download and play.

If you have a computer, video game console or a phone, you could be up and running playing the game in less than 20 minutes.  No cost.  No limits.

Instead, all of the revenue is generated by purchases made inside the game – also called in-app purchases.   Some purchases are to play a newer map before most other players have access.  My son is a big fan of this.  He wants to be first with a new map.  Always.  So he ends up spending about $50-100 per year just to get new maps before most players.  And plenty of other people pay for this service because, again, he never has a problem with finding 100 players to play against.

But most purchases by users center around in-game items.  But here’s the thing:  You can’t buy what you’d normally expect to buy in the game such as this.

I’m not a video game player, but I am a strategy guy.  If I were buying items for a game like this, I’d be focusing on improvements:  Weapons, shields, equipment, etc.,  This is a battle strategy game no different than Battleship or Chess.  If there was an opportunity to buy an extra knight or another battleship in those games, I’d be very interested.

But those types of items aren’t for sale in Fortnite. You can’t buy a single item that would give you an edge in a game.  It truly is a level playing field.  You can’t buy your way to a win.

So what can you buy?

Outfits and “skins” for your character and visual modifications to your standard equipment.  (Namely a parachute and a pickaxe.) That’s it.

You can change your character from one of the basic players to a 70’s disco freak to a jack’o’lantern to just about anything.  And most of these “skins” cost money.  And a lot of players (my son included) spend a lot of money on them.  The average player spends about $20-40 per year, but with 200 million players today (that’s about 3% of the world population), revenue adds up quickly.

How is this changing the entertainment field?

For starters, because there is no box to buy, games like Fortnite put a big dent into the profit margin of places like GameStop and Best Buy.  It is foreseeable for GameStop to go out of business in the next 5-10 years due to the increase of games being played and downloaded online.

On the flipside, games like Fortnite are popular because they are always changing.  Improvements are made on a regular basis.  If you don’t make a game interesting and different, players move on to another game.  So at least quarterly, the entire Fortnite map receives a major overhaul.

Most traditional games have a relatively small team making a new game every 1-3 years.  With Fortnite and its peers, you are talking about major changes to the game at least every 3 months.  That takes a lot of programmers.  So while we may be losing retail jobs, there are new opportunities in video game programming.

Looking at the bigger picture, spending on online games is changing our overall entertainment habits in general.  There are only a finite number of dollars consumers have to spend on entertainment.  Fortnite’s revenue is not a significant number yet, but it’s the latest of many changes that have taken the entertainment industry by surprise.

As cross-platform online gaming expands, it and these other technological advances we’ve been discussing are going to pull money away from traditional entertainment such as traditional television, motion pictures, and professional sports.  Many are claiming that it is these other entertainment options are the leading cause of the drop in popularity of the NFL.  (Except here in New England.  Go Pats!)

While you may never play Fortnite, you will certainly see the effects of the game on our economy in the coming years – both in the entertainment opportunities provided and the potential for investment opportunities as well.

As we’ve been discussing for a month or so now, technology seems to be changing faster than we can comprehend.  My children can’t understand the world we lived in just 30 or 40 years ago.

They giggle when I describe a rotary phone.  “Hold on, Dad.  It would take you up to 30 seconds to actually DIAL a phone number?   And it just rang until someone picked it up?”

Glass soda bottles, cars with bench front seats and dressing up to travel on an airplane are equally looked on with incredulity.

Sometimes technology develops in places that you aren’t even aware of.  We’ve all witnessed, or at least understand, the advances in cell phone technology in the last decade or so.  And we’ve talked on this blog about the advances of Netflix, YouTube, and other tech companies.  But there are other areas growing just as fast, if not faster today.