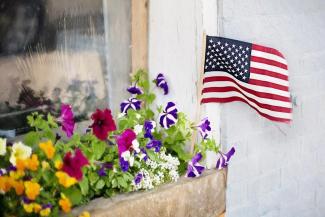 Imagine you could travel back in time to 1918 and the Spanish Flu outbreak.  World War I was wrapping up and suddenly, everyone was getting sick.  Tens of millions died in an event raced across the globe three times in two years.

Life did not look very normal at that time.  And I’m sure people felt that it was never going to be like it was before this disease. Or before the War.

I’m in my early 50’s.  I have to be honest, I enjoyed history class.  I truly did.  I still love history.  Through American History classes in both high school and college I learned all about World War I, President Wilson and the League of Nations.  Gosh I got that League of Nations stuffed down my throat more than once.

But the event that killed 50 million people worldwide -the Spanish Flu?  It was never discussed.  Ever.

Oh sure, I heard about it from time to time.  But no one discussed it like the Depression or either World War.  I’m not kidding when I say that I thought it was some big government secret until my early 30’s.

Imagine the shock if you could bring someone from 1918 into the 1970s or ’80s.  They’d discover possibly the biggest event of the 20th century was all but ignored.  Life returned to such a normality that the event was rarely discussed again outside of those who experienced it.

Humans adapt.  They overcome.  They advance.  It’s what we do as a species.  We’ve been doing it for thousands of years.  We’ve gone so far as to even reach out to other worlds and to send electronic emissaries outside of our own solar system.

What’s in Store for the Future?
I have to be honest.  In early March, I couldn't imagine the economy being “shut down” for more than a week or two.  It just didn’t make sense in my head.  “That can’t happen!” I thought.  But it happened and we found a way to survive.

A month later, we were still shut down.  “Is this going to be forever?” we all thought.  Surely the economy couldn’t possibly recover at this point.  Yet restaurants continued to survive due to take-out.  Supply chains of toilet paper and hamburger and surgical masks were improved.  We took this difficult time and continued to improve on it.

Here we sit over 3 months since this all started and we continue to say, “This can’t go on much longer and be survivable.”  Yet stores are opening.  Restaurants are opening.  Our economy is seeing job recovery and industries that were expected to take massive hits are barely affected.

We certainly have a ways to go to get back to where we were in February.  But I’m learning from my observations over the last 100 days or so and using that knowledge to be extremely hopeful about the future.

Going forward, what are we facing?

For the near-term, we still have some adjusting to do.  Large venues won’t be open.  Restaurants and bars will have to adjust to lower volumes.  The same goes for the travel industry as well.  Businesses (especially retailers) that were on life-support before this crisis probably won’t hold on.

This is going to mean extended job losses for many Americans.  Most of them are not permanent losses, but losses of several months to a year or more.

On the flipside, there is considerable pent up cash and a desire to spend it.  A client who owns a landscaping company tells me that his business is booming because money that would normally be spent on vacations is being spent on yard renovations instead.

Another client who is a general contractor was very worried in early March that he would be out of business due to a Coronavirus shutdown.  Instead, he is overly busy as well.

Some folks will pay off debt during this time.  Others will stash a bigger emergency fund.  (Including a few extra jumbo-packages of toilet paper and paper towels to boot!)  Still others will find a new way to spend the money they were unable to spend in the early days of this pandemic.

And yet still others will invent the “next thing” that will carry us through this event.  I don’t know what it is or what it will look like.  I know that most of us had barely a passing knowledge of how to use Zoom back in March.  Now retirees and little kids are masters at this technology.

What is coming?  Something!

Some Quick Economic Data
Finally, I wanted to leave you with a  few key pieces of economic data as we close out the second quarter.  The stock market, defined by the S&P 500 is up about 20% for the quarter but still down about 4% for the year.

For perspective, at the low in March, the market had fallen just over 30%.  We’ve come back considerably.

Oil and gas prices have been rising steadily in the last month or so.  Wholesale gas prices are at a point where $2/gallon gasoline here in Massachusetts is likely soon.  Oil prices have held rather steady but with increased demand, gasoline prices, as well as other distillates, have risen to meet the demand.

Thursday, the government releases the unemployment numbers for June in addition to adjustments to the May calculations as well.  The consensus is there is no consensus of what the numbers might bring.  I believe everyone is hopeful that we will see a large increase in employment again this past month.

Thank you again for your continued support and trust.  If you have questions, don’t hesitate to either call or email.  We are here to help and we love what we do.