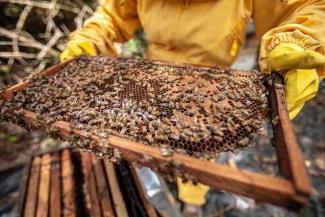 Live a Life of Purpose

Dr. Justin Schmidt is an entomologist.  That means he studies bugs.  He's got a "thing" for stinging insects.  In fact, you may have heard of him.  He's the creator of the Schmidt Pain Scale.  It measures the pain from biting insects from the mosquito to the bullet ant.

Now that I've got you all queasy and feeling strange creepy-crawlies on your skin, let me get to my point.

I was listening to an interview with Dr. Schmidt recently.  He said something in passing that just stopped me in my tracks.  I paused the recording and had to think for a long long time.

First, let me give you some insectoid background.  Specifically honeybees.  For many years, my wife and I had hives of honey bees so we watched much of what Dr. Schmidt described unfold first-hand.

Every beehive will eventually lose its queen.  The loss may be due to old age or attack or a hive mishap (especially in a commercial hive - perhaps the queen gets squished in between the frames of the hive).

When the queen dies, the workers immediately attempt to re-queen the hive by altering a larval cell.  If this is not done quickly, it is too late for the hive.  There is no queen to lay more eggs.  The hive has one chance to save itself.

The average honey bee life span is but several weeks.  Workers have several defined jobs during their lifetimes.  They begin as house cleaners.  Then they move on to hive defense.  Finally, they leave to forage, eventually dying of old age far away from the hive.

While there are bees that are designated as defenders, all bees within a hive will defend from attack be this another insect (like ants or wasps), your local skunk or a black bear.  All the bees will go on the attack towards this enemy to preserve the hive.

Now that you know all of that, here is the important part about Dr. Schmidt’s talk.

If a queenless hive is attacked, the bees don't defend it.

They just don’t.  Other insects can easily rob the hive.  Mammalian invaders are faced with very few stings for their efforts.

We're obviously not sure if they are depressed or just want to eat themselves into oblivion.  But the action is clear - without a defined purpose, they wither and die.

Several years ago, a group of Verizon workers all received an enhanced retirement offer.  There were about 15 men in one department that were eligible and just about everyone took the offer.  Through my work, I knew and worked with most of them.

One man, who seemed like one-of-the-guys, just disappeared off the face of the earth after retirement.  He stopped answering his phone.  He wouldn't answer his door.  He sat in his house and did nothing.  And a year or two later, he passed away.

Why did this happen?

It happened because his entire life revolved around the Phone Company.  He didn't have anything else.  While he wanted to retire, he had no purpose.  And he couldn't figure one out.

Many of us prepare for retirement and never think of those days after.  Sure, we have those amorphous thoughts of "I'll play golf" but nothing beyond that.  It's not a thought until the actual date presents itself.

Much of the stress relates to a fear of making the wrong choices with a pension or Social Security or health care.  A big part is also worrying if you have saved enough to retire - because we only get one shot at retirement.

But some of that stress comes from transitioning from a world of purpose to a world without a defined purpose.  Within all of us is that feeling that Verizon retiree had.  "What am I going to do with an extra 40-50 hours a week?"

The most successful retirees I've witnessed in the last 30 years have been the ones who have a purpose.

Sometimes that isn't a specific purpose on the day of retirement.   But it's an inner desire to make a new purpose.  To find a new "something" to be passionate about.  That might be grandkids.  It might be volunteering.  It might be a second job.  (There is nothing wrong with working in retirement.  It isn't a bad thing if it brings you joy and purpose.)

So whether you are already retired or working to that goal, you should remember to continue to have passion.  To seek a purpose.  Your life literally depends on it.