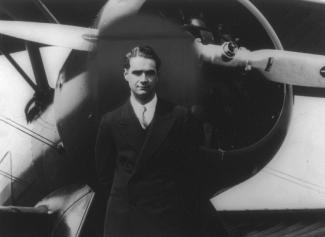 Life Lessons From A Pilot

I grew up very close to my grandparents. Because of my time with them, I developed a rich insight into the years prior to my birth.

I recall my grandparents talking about Howard Hughes. At the time, he was reclusive. But he was, according to their stories, one of the greatest businessmen this country has ever produced.

Several years ago, there was a movie made about Hughes early life: The Aviator starring Leonardo DeCaprio. It’s one of my favorite movies.

Inspired by the movie and memories of my grandparents, I recently read a very extensive biography of Hughes that began with his grandfather in the late 1800’s and carried through his death in 1976 and the battle for his estate afterward.

On the surface, Hughes was amazingly successful. He owned TWA at one time. His name was on Hughes Aircraft which built guided missile systems and the Huey helicopters of Vietnam fame. Of course he was successful! Just like Leo was in the movie.

Yet the truth is a far cry from what is portrayed in popular culture or the motion picture.

Hughes' main source of income for his entire life was Hughes Tool Company, which had the patent on an oil drill bit his father designed. Toolco, as it's often referred, supplied hundreds of millions in profits for Hughes during his lifetime. If you wanted to drill for oil anywhere in the world, you had to use a Hughes drill bit.

In his early 20’s, Hughes dove into the film industry. He began as an investor, then producer then director. Everything had to be done his way. This quite often meant going over budget and over schedule. Despite the popularity of Hughes films, they quite often ran at significant losses.

In the 1930’s, Hughes toyed with airplanes. He designed a plane that he flew himself to beat virtually every long-distance air speed record on the books. Yet his aircraft company ran much like his film empire. Hughes extracted total control, projects ran over budget and he never saw a deadline he could meet.

Many of us know of the Spruce Goose. During the war years, Hughes was desperate to obtain a war contract. In the film, The Aviator, Hughes seems to be operating a large aircraft firm and is having trouble with 2 airplanes. The reality is that Hughes Aircraft was, at the time, a rather small company and they had 2 projects - much delayed and costly experimental aircraft for the US Military.

Around this same time, Hughes purchased a controlling interest in TWA Airlines. Again, Hughes exerted total control and ignored the ballooning expenses at TWA. In the decades he

owned the airline, he ran it into the ground and eventually was sued by the other shareholders of the firm.

One of the last ventures Hughes controlled before his seclusion was Las Vegas casinos. Hughes came to town and attempted to corner the market on the gambling racket - in both Las Vegas and across Nevada.

Like his other ventures, Hughes spent too much, attempted to exert too much control and ran several successful casino properties into the ground.

As we look back at all of Hughes’ ventures, a few stand out as successes. TWA performed well for many years. . . after Hughes was forced to sell his shares. Hughes Tool Company, or Toolco, produced millions of dollars in profits on a very consistent basis for all of Howard Hughes’ life. Hughes seemed to resent Toolco and spent little-to-no time there.

What Can We Learn From Howard Hughes?

Hughes was no dummy. He was an amazing pilot and a fantastic engineer. What he lacked was an ability to honestly assess our business decisions.

Instead of learning from his mistakes, Hughes continued to make the same bad decisions in every company he touched. It didn’t matter the industry or the product. He had a formula and stuck to it. And that formula cost him millions each and every time.

We can get stuck in our own bad decision loops as well. I remember very well the tech boom of the late 1990s. Many people who thought they were financial geniuses because everything they touched turned to gold.

Like Hughes, they never evaluated that decision. They must be doing something right if their portfolio is going up, right?

Well, that’s not how things worked out. The entire boom was a house of cards built on companies that were not making any money and are all but extinct today. Names like CMGI and DrKoop.com.

What can we learn from Hughes within our own lives, both in our investments and our other decisions? To be brutally honest yet not judgemental.

This is valuable in both our successes and failures. Was this the outcome I expected? Why did it occur? Was it because of a massive economic change or a new regulation or did I see something that no one else did?

It seems obvious in our failures to assess the past. But constantly evaluating our decision process, even in our successes, helps us make better decisions in the future.

And the future is out there. And it’s chock-full of decisions that have to be made. We can keep guessing or sticking to our system like Howard Hughes. Or we can take stock in our situation and make better decisions.