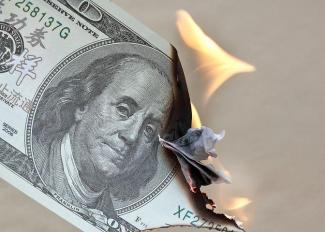 Is Everything Getting Too Expensive?

I wanted to spend some time this issue and break down some of the information the government publishes that we take for granted.  I promise it won’t be nearly as boring as that sounds.

It’s not very important that we know how to calculate the figures the government releases.  But if we understand how they are calculated, we can make better decisions with our investments as well as other aspects of our financial lives.

As you’ve probably noticed over the last 6 months or so, the Federal Reserve is on shaky ground whether to raise or lower interest rates.  The Fed Funds Rate, the chief rate set by the Federal Reserve, is around 1.75%.  Many, including the President, hope it goes lower.

How does the Fed set the rate?  Well, they look at a number of factors including economic growth in the country and world, the employment situation and inflation.

It’s that last one I want to spend some time with today.  As much as the Federal Reserve frustrates me at times with their decisions, determining what inflation is can be very difficult to achieve.

Inflation is everywhere. If you asked a random adult of just about any age and they will tell you it’s terrible.  A $1 candy bar used to cost 25 cents, or a dime, or a nickel.  I remember my grandmother telling me about going to the ice-cream cone factory to get a paper grocery bag (remember those?) full of broken cones for just five cents.

Back in the Spring, I was driving past a local church that was having a clam boil fundraiser.  If you’re from this area, you know a clam boil.  It’s a big pot with clams, sausage, potatoes, corn and onions, among other items.  I’m not a big clam fan, but it’s a meal take that harkens back to a time when people didn’t have money and scrounged for a healthy inexpensive meal for their family or Summer get-together.

What bothered me – and you can tell because it’s almost 6 months later – was the price.  The clam boil was $25 per person.

“TWENTY-FIVE DOLLARS???!!!!!” I exclaimed.  It’s some potatoes and sausage and corn (although it was so early in the season, corn was probably off the menu).  And clams are practically free, right?  I mean, you can pick them up at the beach if you really wanted to!

Even though it’s easy to see inflation in examples such as this, the reported statistic is very elusive.  When the government began tracking inflation (defined by the Consumer Price Index or CPI) about a hundred years ago, they selected a common “basket of goods” to maintain a baseline. As time passed, that basket of goods became somewhat irrelevant. Items that most consumers purchased back then weren’t so commonplace anymore.

Take food, for instance.  Tastes change.  As does the diet of the average American.  I’m willing to bet that lard was within the 1920 Consumer Price Index calculation.  When was the last time you purchased real lard?

We see those changes continue even today.  In the last decade, the American consumer has cut back on grains within their diet and increased meat consumption.  In the 1970’s, it was the exact opposite – less meat, more grains.  The CPI must factor in all of these types of changes.  Not just in food but in every aspect of our spending.

The government also discovered that when the price of some items in the basket rose temporarily, people would purchase alternate items. For instance, when steak becomes expensive, people purchase more ground beef or maybe even chicken. Ergo, modifications were made to the CPI to reflect this. Today, the number is more conjecture than fact.

What makes it even more maddening is how some products don’t rise in cost evenly. Take college tuition, for example.  Most folks would think that tuition has grown quickly and steadily in the last 30 years.  But it hasn’t.  In fact, as tuition reached milestones such as $25,000 per year and $50,000 per year, you saw a hesitation in the price increase.  Institutions don’t want to cross those mythical lines for fear of upsetting the parents of new undergraduate students.  But after they do, costs increase quickly to make up the difference.

Groceries also often rise in fits and starts. And while we shop regularly for these items, it’s a category that we usually don’t have a good handle on.  Currently, meat is relatively cheap in comparison to a year or two ago.  You may recall in 2008 when rice prices went through the roof (and then just as quickly dropped in price), or back in the late 90’s when cereal prices went from inexpensive to outrageously expensive seemingly overnight.

All of those individual changes need to be factored into the monthly and annual CPI number.  You’re probably getting the picture of how hard this can be to calculate.

Other items, especially technology, have tended to get cheaper over time.  Take computers for instance.

In 1980, a base model Apple or IBM computer cost about $2,000.  When I began my business in 1993, my first business computer cost. . . $2,000. Last year I picked up 2 new Apple computers for my office. Cost?  $2,000 each.  Not to mention that most Americans can probably do without a computer with smart phones and tablets which cost half of what a computer costs.

Televisions are even worse. My last tube TV was purchased about 15 years ago for $500.  A few years later, I bought my first flat screen tv. It was a floor model on sale at the now defunct Circuit City. I happily paid $1,300 for tv that retailed for over $3,000. That same tv today - actually one with better technology - costs between $200-400.  In a bit more than a decade, television prices have dropped by 90%!

Finally, there are some categories that just defy explanation.  There are multiple factors affecting them simultaneously.

The average American house costs about ten times what they did in 1970.  But today’s houses are 2-4 times larger than they were in 1970.  And they are built on bigger plots of land with more amenities and are far more energy efficient. Are houses more expensive or less? How do you factor all of that in?

It can be very confusing.  Compared to fifty years ago, we have more cars in our driveways, more tv’s in our significantly bigger houses and we are constantly plugged into a communications network that would have made NASA jealous in 1990.

So, tell me, based on all of that information:  How much have prices increased in 2019?  How much has this year’s increase in the price of oil factored into your spending versus the drop in television prices??

Suddenly, we actually feel bad for those folks at the Labor Department that have to keep track of all of this and try and distill it into a monthly and yearly factor.

What does all of this mean to us?  Well, for starters, it’s important to know how these numbers are created, at least in concept.

Second, we need to realize that inflation is a much more important number in the long term.  Remember that ten-cent candy bar that’s now a dollar.  It’s easy to see inflation over time.  It’s much harder when you’re up close and personal.

What the government says inflation looked like last month is a pretty meaningless number on its own.  Yet there are times where the market reacts violently to the news.  Knowing to look longer-term can help us ignore these short-term market gyrations

Finally, we need to remember that we will survive.  If we survived the 1970’s and early 80’s with the hyper-inflation, we can certainly weather any future storm as well.