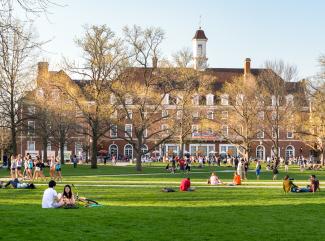 It is that time of year when the leaves are falling that we think fondly of our nation’s institutes of higher learning.  When you think of college, you think autumn and somewhat vice-versa.  Maybe it's just me. Maybe it’s from watching Animal House one too many times.

Unfortunately, we haven’t been looking so fondly at higher education in the last several years.  In fact, we’ve been worried.  How is it that students borrow tens and hundreds of thousands of dollars for a degree that does not provide a significant economic benefit?

Currently, the US student loan problem is a $1.6 trillion issue. (Source: WSJ)  As someone who graduated college right around when the problem began, I can completely understand the issue.

Back in the late 1980’s, very few people borrowed money to go to college.  If there was any borrowing going on, it was a home-equity loan against Mom and Dad’s house.

Thirty-five years ago, college was just more affordable overall.  I was able to pay for room-and-board by working about 25-30 hours per week.  On the other hand, we had powdered eggs for breakfast in the cafeteria.  It was affordable but definitely not luxurious.

In the mid-80’s, Congress changed the course of higher education funding by diverting significant federal funds from grants to loan programs.  Their theory, which seemed sound, was that the government could provide help to more families this way.

The programs started small.  Over the next few years, the loan programs expanded and borrowing limits were increased.  The government’s loan program grew from helping those most in need to providing a loan for every student that wanted one - whether they needed it or not.

But that can’t be what is causing the problem, can it?  I mean, if the majority of students could afford to pay before the government expanded the borrowing programs, the majority should continue to afford to do so afterwards, right?

Sadly, that’s not true.  In fact, it may be the federal student loan program that created the problem in the first place.

Think of the educational experience in 1990 versus in 2021.  Back in the day, we were lucky to have air conditioning in either the classrooms or the dorms.  Our choices for breakfast at the cafeteria included a singular choice hot meal, cold cereal or go hungry.  We paid $800 for a required “laptop” computer that weighed 30 pounds.

Contrast that to today.  We have climate control in every classroom.  We have more choices at every meal than you’d have at your local Panera.  And we have state-of-the-art technology in every class, every day.

Is the education any better?  It might be.  I doubt it.

What is better is the experience.  When the loan programs began, colleges increased tuition.  They used that money to fund projects to make their school more attractive to students.  (Aside:  It’s an astute marketing play.  You use current students’ money to market to the next batch of students and so on.)

Unfortunately, this wasn’t isolated to one or two universities.  Every campus increased costs and expanded offerings.  A few years later, it was necessary for everyone to raise prices again so they could expand offerings and amenities again.  As long as the funds from the loan programs continued to increase, colleges and universities continued to spend it to make their campuses better.

This didn’t just happen at private schools.  Public schools joined in on the game as well.  In high school, my daughter Anna attended a summer program at UMASS Amherst - where her mom attended.  Her dorm room was a massive improvement from the dorms my wife remembered.  So was the cafeteria and most every other amenity at the university.

Here we sit, thirty-five or so years later.  College has become less of an education and training and more of a four-year experience.  All for the low-low price of $30-80,000 per year.

Recently, I was listening to a podcast that was addressing the issue of mounting college debt.  The central character was a woman who decided to finally attend college (part-time) in her 30’s.  She’s now in her late 50’s, has her doctorate in psychology and is $120,000 in debt.

The woman, and the podcast, seems to blame the lenders for lending her the money.

And I’m wondering something as I listen.

Why did this woman keep going to college if she was not seeing an increase in her income for each degree she received?

I have a confession:  I’m a bit biased.  I hated school.  From my first year of pre-school to my last day of college, I hated it.  So I take a bit of a different view - it’s 100% about the money for me.  Why go through that experience if I wasn’t going to benefit from it financially?

This woman received four separate degrees.  After her bachelors, there had to be a financial reason to continue, right?

I guess not.  It was clear from the podcast that she deferred just about all of her payments and is currently only making a payment of about $500 per month on $120,000 of debt.  She’s never going to get out from under it because. . . . the interest on $120,000 is greater than her current barely-affordable payments.

That debt will never be paid.  At some point, either some sort of loan-forgiveness program will kick in or she will pass away and the debt wiped out in probate.  Either way, the US government (read: you and me) are on the hook for $120,000.

After I processed all of that, another thought popped into my head:

If the degrees she received were never going to benefit her financially, why isn’t she blaming the educational institutions?

Everyone keeps focusing on the lenders in this debate.  The lenders did exactly what they were supposed to.  They supplied federally guaranteed funds to someone seeking them.  Nothing more.  Heck, Congress is more at fault in this debacle than the lenders!

There isn’t a single industry I can think of where you get a mediocre product or service and blame a third party for your problem.

The silver lining is this:  I think the entire education industry is changing right before our eyes.  It was already changing before the Pandemic.  It is changing faster because of it.

Today’s parents of incoming freshmen are some of the first parents who had to take out student loans to survive.  So they’re making smarter choices.

And with virtually all students working from home or dorms last school year, parents are noticing that this whole “college experience” is extremely costly with no benefits.

What does that mean for our nation’s institutions?  It means some institutions will close.  We’re already seeing that.  Demographics say that the pool of students entering colleges is shrinking annually.

Add in some smart choices by parents and a strong push towards the trades and you’ll see that pool shrink even faster.

Once it starts to shrink, prices start falling.  Schools consolidate to save money.

It still does not settle the trillions of dollars in current student debt.  People were sold a lie and now they have to face those consequences.  Perhaps as colleges consolidate and close, the real estate can be sold and a fund created to pay down the $1.6T of debt.

Maybe we scrap the entire loan system.  Sure there would be pandemonium for a few months or even a year.  But in the end, colleges and universities would have to adjust their pricing based on what people could actually afford.  What a novel idea!

To be sure, this issue is not over.  It’s definitely going to get uglier for our nation's colleges but likely rosier for the rest of us.

This blog is the opinion of Successful Money Strategies, Inc. and is provided for informational purposes only and is not intended to provide any investment advice or service.  Statistics and other figures are accurate at the time of original publishing.  Any advice herein should not be acted upon without obtaining specific advice from a licensed professional regarding the readers own situation or concerns.  Always count your change