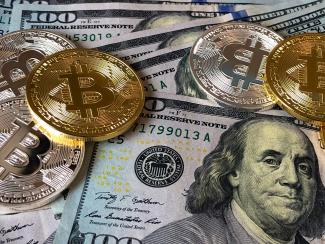 Bitcoin and Cryptocurrency in 2021

A topic that has come up more frequently in the last six months is cryptocurrency and Bitcoin (and Dogecoin and a myriad of others).  Most financial sites now track these currencies.  And I can’t get away from 8 emails and online five ads a day telling me how to make millions in the crypto marketplace.

As I talk to clients, I realize that not many people actually understand what a cryptocurrency is, how it works, and how it’s making so much money today.

Most folks I talk to have three basic questions when it comes to cryptocurrency:

1.  What is Bitcoin and a cryptocurrency?

Let’s start with the basics – what’s a cryptocurrency?  It’s a form of electronic payment that relies on cryptographical algorithms to secure the transaction.  Simply put, it uses a lot of complex math in order to ensure the buyer is the buyer and the seller is the seller.

Years ago, I worked at a trust company in Boston.  In the pre-internet days, the company implemented a fairly simple method to ensure an account number was valid.  It was called a check-digit.

It was a simple way to ensure that account numbers were correct by both people and the ancient computers we used.  The complicated math used to verify a cryptocurrency transaction is sort of like those old check-digits, but far more complex.

Bitcoin was the first cryptocurrency created.  Many are amazed that despite the recent hype, Bitcoin was "created" over a decade ago.

It was debuted to a group of cryptographers online first.   And that makes sense.  Cryptographers would have to be the inventors of such a secure payment system.

In addition to being very secure, due to the cryptographic nature of the system, it is very very anonymous.  You don’t get a note in your inbox saying you just got 30 Bitcoin from Joe Franklin.  You just get the Bitcoins (as a file attachment) without ever knowing who sent them.

And that was the initial attraction to Bitcoin.  It's anonymous.  I often joke to people about this, but if you want to buy a machine gun or black tar heroin from an online "dark web" source, you would prefer to use Bitcoin.  Since it is almost impossible to track the currency's owners, Bitcoin ensures that you can buy your machine gun or heroin unfettered by the authorities.

In the last several years, Bitcoin has expanded in use.  People do actually use it for novel online transactions.  There are Bitcoin ATM’s popping up in many areas.  Some online retailers accept them.  You can even buy a Tesla automobile with Bitcoin.  (Actually, Tesla recently stopped accepting Bitcoin as payment.  This, like many things, changes with the whims of CEO Elon Musk.)

There is a catch – these payments aren’t so secret.  Most companies use a third-party to handle the transaction and convert your cryptocurrency into hard dollars.  Coinbase is the largest company to do this but there are many others.

The majority of Bitcoin and other crypto transactions occur on these exchanges.  Because without them, you’re trying to sell your Bitcoins to your friends or on Ebay or Craigslist.  There is something to be said about having a central repository for transactions.  Like a bank.  Or stock exchange.  (Yes, that is sarcasm.)

Utilizing these companies removes the one true reason to buy cryptocurrency in the first place – anonymity.   Suddenly, Bitcoin and others aren’t for secret transactions.  They are for fun novel transactions and speculation.

Why Are Prices So High?

Several years ago, we got our first taste of a "bump" in Bitcoin pricing.  It wasn't just the criminal underworld that was using the currency.  Suddenly regular people were getting in on it.  Some buyers use it to have a source of funds outside the reach of the government.  Some use it just for fun; to see how it all worked.

If only we could predict the next investment craze.  The next Beanie Baby.  The next fidget spinner.  The next Tulip Bulb Mania.

Shockingly, in the early 1600's, there was a run on Dutch tulip bulbs in Europe.  Prices rose by 200 times in less than 3 months.  All this happened in a time when we had no internet, no telephone. . . not even a telegraph.

By mail and sail only, the continent saw prices absolutely explode in the winter of 1636.  By May of 1637, prices had receded to their previous levels.  Fortunes were made.  Even more fortunes were lost chasing the tulip bulb pricing.  You can read about it online by searching for Tulip Mania.

In recent years, we've seen plenty of times when asset pricing goes awry.  Just before and somewhat during the 2008 financial crisis, it seemed every commodity under the sun was going bonkers.  Gold peaked at around $1,800 per ounce, oil approached $150 per barrel (and has traded at half that or less virtually ever since) and silver topped $40 an ounce.

Even rice went crazy.   I'm not lying.  There was an honest-to-goodness run on rice in the US.  Costco, Sam's Club and BJ's Wholesale had a limit on how many 50lb bags of rice one customer could buy.  People who never ate more than a pound of rice at home a year were buying bushel bags just to be sure they had enough.  And this over-buying further fueled the belief of a shortage.

And just as suddenly as these times came, they went away and prices returned to normal.  Sanity crept back in and prices corrected rapidly.

But there is something that oil and silver and gold and rice (and tulip bulbs) have in common.  They are useful to us in-and-of themselves.  They have an intrinsic value.  We can eat them or use them in manufacturing or distill them and drive our cars.

What can you do with a Bitcoin besides buy something???

And there lies the big secret about cryptocurrencies – they have no true intrinsic value.  Even the US Dollar has value as it is backed by the taxing authority, and by proxy the economy of the United States of America.

Bitcoin and its peers are backed with a promise that someone will still want them tomorrow.  And nothing more.

What makes the game worse is the price swings we’ve seen in the last several years – especially this year.  Would I really want to sell you an AK-47 or a kilo of raw heroin if I thought my Bitcoin might be worth only 80 cents on the dollar tomorrow?

What this volatility does is drive away actual users of the currency and replaces them with more speculators trying to cash in with some quick profits.  And that could spell the eventual crash of cryptocurrencies.

Ultimately, the greatest threat of cryptocurrencies is the vast availability of physical cash in the marketplace.

The US has over $1 trillion in just $100 bills outstanding.  (Source: US Mint) That is a staggering number.  For a world trying to go electronic, it is still far easier to buy your AK-47, your drugs and certainly a copy of Microsoft Office and a sub at Subway with hard currency.

If it seems at this point like crypto is just a speculative investment for speculative people, you’re 100% right.  It’s hot for the same reason GameStop was hot back in January.  People have watched it go up and want to get in on the game.

The more speculators buying, the more the price rises.

At some point, a new “shiny object” will capture the attention of speculators.  With less and less buyers, what happens then?  Prices fall.  Just like with silver and gold and tulips and rice and gasoline.

(Disclaimer:  These are my opinions as of mid-May 2021.  Don’t go doing something because I said so and blame me later.  Every investment choice has a risk associated with it – so be careful.  If you want the legal version of all of that – check out our Website Disclosures at the bottom of every page of this website.)

A Note on Taxes

Many crypto speculators have been fairly vocal that their gains are not taxable because “it’s crypto!”  Nothing could be further from the truth.

As I mentioned, many people do not trade directly with Bitcoin but use a third-party source to facilitate the transaction.  Just recently, the IRS has been investigating users of these services to be sure that income taxes are paid on the gains people are realizing in Bitcoin and other crypto assets.  Potential Bitcoin thousandaires are in for a big tax surprise.

Will Bitcoin and other cryptocurrencies survive in the future?  I believe so.  I believe there is still a base-level of consumers that prefer to transact without government interference and for whatever reason cannot use $100 bills.

Do I believe that cryptocurrencies are headed for a decline as speculators stop buying them and chase the next investment craze?  Yes, I do.  That doesn’t mean it may not keep climbing before it does fall.  But all signs point to a fall.  Until there is a viable system that requires Bitcoin, there is no need for Bitcoin and it is at the mercy of the speculators.