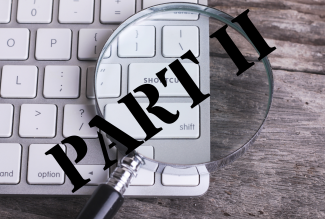 This is the second of a two-part blog on mental shortcuts.  You can find the first part HERE.

Mental shortcuts are an evolutionary quirk that allows us to gain an edge on Mother Nature.  But because of their very nature, they can backfire.  We are operating on limited information, so things can go awry.

Specifically, let’s talk about false assumptions and rules of thumb. I despise rules of thumb.  They can be a good starting point, but they seem to be wrong a lot more often than we would think.  Some of them just have no basis in fact at all.  They’re more old wives’ tales than rules of any sort.

We’ve got rules of thumb for everything. Not just our investing.  Don’t salt a dish until before serving.  Never walk behind a horse.  When drawing a portrait, the eyes are always in the center of the head, top to bottom.

Not one of those is universally true.  They have roots in truth, but they aren’t 100% accurate.  (Cooking tip - salt your scrambled eggs in the bowl while mixing.  It’s totally against everything you may have learned about making scrambled eggs, but it makes a huge difference.)

What about this one?

The shortest distance between two points is a straight line.

What if it wasn’t?  What if there was a glaring exception to that rule?  Then what?

Check out this video here:

Amazing, isn’t it.  The decline plane with the longer path is actually faster.  The longer the run, the longer the curved section, and the larger the margin of victory.  So a run of 2 or 4 or 8 feet would only magnify the results.  A longer and longer track means a shorter and shorter time relative to the straight line.  It’s the rule of thumb in reverse.

Or look at history.  History is full of rules of thumb and other false narratives.  “Facts” we learned in school - and children are still learning in school today - aren’t so factual.  Yet we still talk about them in absolutes.

And the Pilgrims landed on Plymouth Rock, right?  I’ve been there a dozen times or more.  There it is.  It’s even engraved with 1620 to commemorate the moment.  Never mind that the rock was “identified” years later.  No one really knows where the Pilgrims landed.  Nor is it that important.

What about Paul Revere?  He single-handedly prepared Massachusetts for the British invasion on April 18, 1775, right?  OK, probably not.  But he was the most important person in that operation, correct?  In reality, he was a major player but most of the credit is due to the Longfellow poem?

Not everyone is going to read David Hacket Fischer’s tome on Revere or Charles C. Mann’s 1491 or 1493.  (These are all fascinating books, by the way!)  And that’s just two small areas of history.  We’d need to be a super-computer to have that sort of knowledge about every subject that crosses our paths.

So we use shortcuts.  Rules of thumb and other assumptions.  It’s an evolutionary solution to a complex problem.  We reduce the problem to a few short facts and act.

This skill served our ancestors well.  You don’t need to know the species of the tiger that is stalking you to know you are in trouble.  Nor do you need a barometer to know that it’s probably going to rain tonight.  Fast decisions in our early history usually spelled survival.

And sometimes it can still backfire.  You may see that tiger and not know that this species hunts in packs.  Or that cloud formation isn’t an evening shower, it’s a forest fire.

It’s even worse today.  In our data-overload society, we can’t help but use shortcuts and rules of thumb to manage our worlds.  Obviously, I see these crop up in the financial world all the time.  And if we don’t understand the limitations of these rules of thumb, they can get us into real trouble!

One of the most common is a “truism” I hear all the time is this:

100 - your age = The % of your portfolio that should be invested in stocks.

It’s ubiquitous.  I hear it at least once a month.  Let’s see how it works.

Based on the formula, a 60 year old investor should have 100 minus 60, or 40% of their portfolio in the stock market.

On the surface, that seems reasonable, right?

I could make an argument that a 90 year old should be invested conservatively.  But investing only 10% of their money in the stock market?  I have several 90+ clients.  None of them are at 10% equities.  If I suggested it, they would laugh at me.

Worse is the 25 year old.  Someone in their mid-20’s with 25% of their money in bonds and money market???  Retirement is decades away.  Does that even make sense?

This rule of thumb might be applicable for some people between the ages of 50 and 65, but that’s it.

But the people asking this question have no clue what tax bracket they are in, what municipal bonds are earning or what they could earn after-tax in other bonds.  The shortcut is just “tax-free is good.”

The reality is that most folks fall into the 12% or 22% tax bracket.  Most people buying municipal bonds are in the 37% tax bracket - and often in states with high-income taxes as well.  They are willing to accept a much lower interest rate than you or I because they’ll make it up on the tax-free nature.

For the majority of Americans, owning a taxable bond will earn more money - even after paying the taxes, than a municipal bond.

There are literally hundreds of these situations that can crop up.   “It feels right” isn’t a good enough excuse.

What’s the solution?  Well, if we’re talking history, you probably won’t jeopardize your retirement success if you think that Paul Revere was the most important player in April of 1775.  But making snap decisions with your finances can have large impacts on your financial life.

Some areas of our lives we don’t need to know everything.  If you love making bread and are happy with how your bread comes out, you really don’t need to bone up on how humidity and hydration and different techniques will affect your bread.

But putting “just enough” effort into your finances is a recipe for disaster.  (No pun intended.)  You can’t take shortcuts when it comes to your retirement.

One mistake in cooking means starting over with a new batch of dough.  A mistake with a history fact may cause some minor embarrassment at a cocktail party.  But a mistake with your finances because of a faulty assumption could mean a severe reduction in your standard of living.

Do the hard work.  Don’t trust the trite assumptions and popular theories.  Know your numbers regarding your finances.  Otherwise, that tiger just might eat you.